In a post on December 29, 2010 (at minneapolisparkhistory.com) I asked how these two pictures were related to the creation of Minneapolis parks. 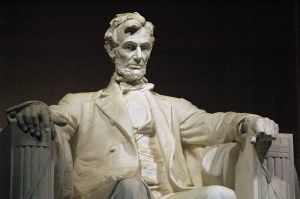 Nobody has come up with the right obscure answer! So I’ll tell you.

The photos are of the most famous works of American sculptor Daniel Chester French. (The best example of French’s work in Minneapolis is the statue of John Pillsbury at the University of Minnesota, although he also created several works for the Minnesota capitol building in St. Paul.)

Their father was Henry Flagg French who was the number two man in the U. S. Treasury Department in the 1880s. For eight months in 1881 he worked under Secretary of the Treasury William Windom, a U. S. Senator from Minnesota who resigned his Senate seat to become Treasury Secretary for President James Garfield. After those eight months, Windom resigned his cabinet position and was elected to fill his own open seat in the Senate. He served as Secretary of the Treasury again from 1888 until his death in 1891.

The important connection of William French to Minneapolis parks is that after graduating from Harvard and studying engineering at MIT he moved to Chicago to work with a man in the new and unusual profession of landscape gardening. In 1870 William French became the partner of a man thirty years older than he was, an old friend of his father’s. That pioneering landscape architect was Horace William Shaler Cleveland.

Of course, young William, who was eager I’m sure to earn his keep with his much more experienced partner, went through his list of connections to identify potential clients. He likely recognized that one name on his list might provide useful contacts in a young city west of Chicago: Minneapolis. That contact was his cousin, George Leonard Chase, who was rector at the episcopal church in the small town of St. Anthony, which was springing up beside the falls of that name. Now it just happened that Chase had married one of the Heywood girls, Mary. And that was a funny thing because Chase’s best friend married Sarah Heywood, Mary’s sister. He and his best friend had lived together while they were students at Hobart College in New York. In fact, Chase apparently had some influence with the regents of the University of Minnesota when they were hiring the university’s first president in 1869. Chase’s friend and brother-in-law by marriage was hired for that job. His name was William Watts Folwell.

About the time William French went to work with Horace Cleveland in Chicago, Folwell was trying to gather information on building a campus for the University. Among others he contacted with questions was Frederick Law Olmsted. Olmsted gave Folwell some perfunctory advice but showed no interest in designing the campus himself (Folwell Papers, University of Minnesota). So we know Folwell was interested in landscape architecture for a campus and his best friend had a cousin who was in the business with one of the better-known men in the profession in nearby Chicago.

I have seen no evidence of it, but it ‘spossible that when Folwell was called to Washington, D. C. for a conference and couldn’t keep his appointment as a speaker at the People’s Course of Lectures in Minneapolis in February, 1972 that he might have said, “Maybe this Horace Cleveland dude that George Chase has been telling me about would stand in for me.” So Cleveland came to Minneapolis for the first time in February, 1872 and he met some of the same people who would later hire him to create a plan for the Minneapolis park system. In the language of Mythbusters, “entirely plausible.”

Who knows if Cleveland would have made it to Minneapolis and would have had the same connections without his partner William French being able to introduce him to influential people. When Cleveland returned to Minneapolis to do some private work later in 1872 he was a guest at the Folwell’s home in southeast Minneapolis for a week. (Folwell Papers).

French also kept alive Cleveland’s contacts in Minneapolis over many years when he and Cleveland did not have work here. (Here and below, see Folwell Family Papers, Minnesota Historical Society, for French’s and Cleveland’s letters to William Watts Folwell.) Later in the 1870s, French developed a plan to become a lecturer on art. Some of his first audiences were in Minneapolis.

An article in the Minneapolis Tribune of July 25, 1876 provided a summary of famous lecturers who would be on the lecture circuit around the country that year. Included among them was Mr. M. R. (sic) French “who will give talk and chalk entertainments.” “Mr. French is a fluent speaker, as well as rapid drawer, and is, in many respects, the most acceptable crayon lecturer in the field,” the news item explained. “He will be very successful.”

A better sense of a “crayon lecturer”—should images of Harold and the Purple Crayon pop into your head—was provided by a Tribune review of French’s first lecture in Minneapolis on March 12, 1877, sponsored by the Hermean Society at the University of Minnesota. His “illustrated” lecture was entitled, “The Wit and Wisdom of the Crayon” or “Fine Art as a Mode of Expression.” According to the Tribune the next day, “Mr. French won many admirers last night.” His ability to draw to illustrate his points about art were central to his success. He would deliver two more lectures in Minneapolis that winter and several more in succeeding years.

French was often a guest of the Folwell’s when he visited Minneapolis. During one visit in 1881 French suffered a nervous breakdown and recuperated in the Folwell home. He later wrote to Folwell thanking him and Sarah for giving up their bed to him while he convalesced. French remained a loyal friend of Cleveland even after Cleveland moved to Minneapolis from Chicago in 1886. In the 1890s, when Cleveland could no longer work due to his age and he had little money, French wrote to Cleveland’s friends asking for donations to create a fund for him. One of those to whom French appealed was Frederick Law Olmsted. (Olmsted Papers, Library of Congress.) Cleveland also sent one of his granddaughters to Chicago to study at the Art Institute. When she married several years later, after her grandfather had died, the ceremony was held in the Chicago home of William French.

In 1912 as Minneapolis was preparing to construct a new art museum—Minneapolis Institute of Arts—on the land donated by Clinton Morrison—officially Dorilus Morrison Park—William French persuaded his then-famous brother, Daniel Chester French, to donate two statues to the collection of the new museum. The donation of two “colossal working-model statues” was spurred by the “great interest taken by Mr. William M. R. French in art progress in Minneapolis,” according to an article in the Minneapolis Tribune, March 24, 1912. The Tribune reported that until the new museum was completed the statues would be placed at North High School and South High School. (The MIA has no record of what became of those statues.)

So the statues of Abraham Lincoln at the Lincoln Memorial and the Minute Man at Concord, Mass. have this in common with the Minneapolis park system: the French brothers played a role in the creation of all three.

(This article was published in very similar form and content on January 19, 2011 at minneapolisparkhistory.com. Used by permission.)